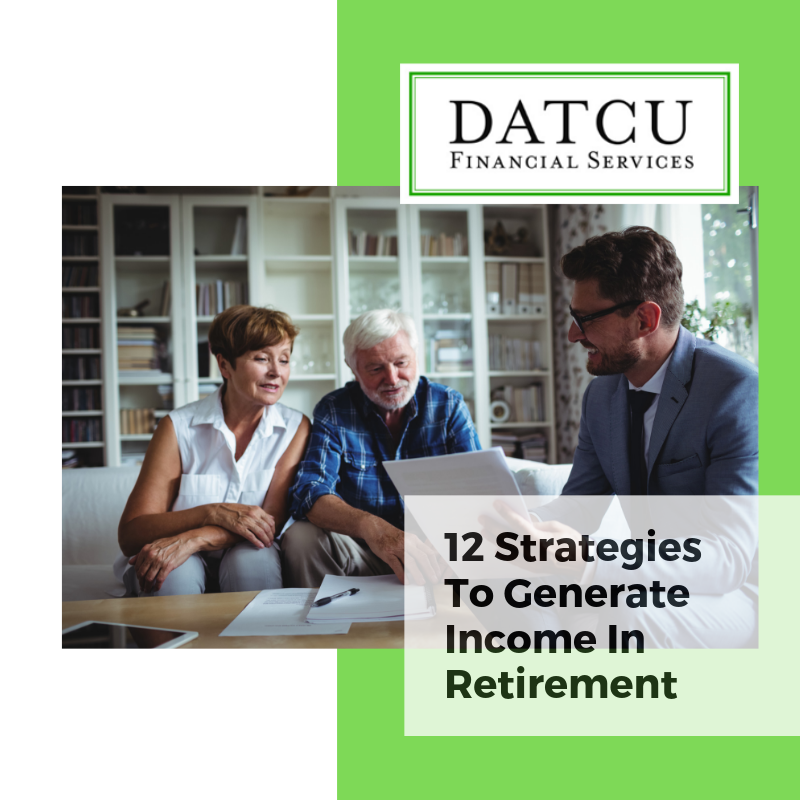 12 Strategies to Generate Income In Retirement

When it comes to saving for retirement, maybe you've done everything right. You started early, maxed out your 401(k) plan, invested in a diversified portfolio and avoided costly mistakes, such as cashing out your retirement plan. Fantastic. But now comes the hard part: making sure you don't outlive your money.

That's a tall order for today's retirees. Taxes, unpredictable investment returns, rising health care costs and inflation down the road can significantly erode the value of your nest egg. And perhaps the biggest challenge is that you'll probably need the money for a long time. A 65-year-old man has a life expectancy of 19.3 years; it's 21.6 years for a 65-year-old woman. If you're married, there's a 45% chance that one of you will live to age 90 and a nearly 20% chance that you or your spouse will live to 95.

Fortunately, there are steps you can take to generate extra income and extend the life of your portfolio.

Inflation is the rate at which the general level of prices for goods and services is rising, and, subsequently, purchasing power is falling.

Interest Rate Risk is the risk that an investment’s value will change due to a change in the absolute level of interest rates, in the spread between two rates, in the shape of the yield curve or in any other interest rate relationship. Such changes usually affect securities inversely and can be reduced by diversifying (investing in fixed-income securities with different durations) or hedging (e.g. through an interest rate swap).

Treasury inflation-protected securities (TIPS) help eliminate inflation risk to your portfolio as the principal is adjusted semiannually for inflation based on the Consumer Price Index – while providing a real rate of return guaranteed by the U.S. Government.

Yield is the income return on investment. This refers to the interest or dividends received from a security and is usually expressed annually as a percentage based on the investment’s cost its current market value or its face value.

Investing involves risks including possible loss of principal. No investment strategy or risk management technique can guarantee return or eliminate risk in all market environments.

The opinions voiced in this material are for general information only and are not intended to provide specific advice or recommendations for any individual security. To determine which investment(s) may be appropriate for you, consult your financial advisor prior to investing.

Fixed and Variable annuities are suitable for long-term investing, such as retirement investing. Gains from tax-deferred investments are taxable as ordinary income upon withdrawal. Guarantees are based on the claims paying ability of the issuing company. Withdrawals made prior to age 59 ½ are subject to a 10% IRS penalty tax and surrender charges may apply. Variable annuities are subject to market risk and may lose value.

Alternative strategies may not be suitable for all investors and should be considered as an investment for the risk capital portion of the investor’s portfolio. The strategies employed in the management of alternative investments may accelerate the velocity of potential losses.

The Standard & Poor’s 500 Index is a capitalization-weighted index of 500 stocks designed to measure the performance of the broad domestic economy through changes in the aggregate market value of 500 stocks representing all major industries.

Investing in Real Estate Investment Trusts (REITs) involves special risks such as potential illiquidity and may not be suitable for all investors. There is no assurance that the investment objectives of this program will be attained.

An investment in Exchange Traded Funds (ETF), structured as a mutual fund or unit investment trust, involves the risk of losing money and should be considered as part of an overall program, not a complete investment program. An investment in ETFs involves additional risks such as not diversified, price volatility, competitive industry pressure, international political and economic developments, possible trading halts, and index tracking errors.

This material contains only general descriptions and is not a solicitation to sell any insurance product or security, nor is it intended as any financial or tax advice. For information about specific insurance needs or situations, contact your insurance agent. This article is intended to assist in educating you about insurance generally and not to provide personal service. They may not take into account your personal characteristics such as budget, assets, risk tolerance, family situation or activities which may affect the type of insurance that would be right for you. In addition, state insurance laws and insurance underwriting rules may affect available coverage and its costs. Guarantees are based on the claims-paying ability of the issuing company. If you need more information or would like personal advice you should consult an insurance professional. You may also visit your state’s insurance department for more information.